One of our standalone Hyper-V hosts was experiencing performance issues with the Remote Desktop Session Host that provides the company’s primary user environment.

The main application running on the session host can be a bit finicky so we ran the gamut troubleshooting within the guest OS.

The performance drags were happening throughout the day with no correlation to any scheduled tasks in-guest or on the host.

The host is no slouch as far as the hardware setup goes.

From the looks of things, there should be no issues whatsoever.

The next step was to check and see what the host was doing.

Recycling the service brought its memory usage right down and all of a sudden the RD session host picked-up and started responding normally.

So, what do we do to deal with this? We draw upon our Small Business Server (SBS) experiences! 😉

Note that in this case we default to using the built-in OSQL commands to manage memory so there’s no need to download and install SQL Studio Management Express for this one task.

The first thing to do is to discover the instance name. This can be done via command line or in Services.MSC:

With that in hand we open an elevated command prompt (CMD) and run the following commands making sure to set the correct host name:

This is what the commands look like in the CMD window:

We chose 768MB to err on the safe side as far as memory needed. Note the memory amount that was originally set!

Our experience on SBS was similar in that the SQL instance would be more than happy to take up as much memory as it could but was very reluctant to release it after it was done.

If we experience any performance related issues within Veeam we will tweak that setting upwards by 256MB chunks to get things to settle down. 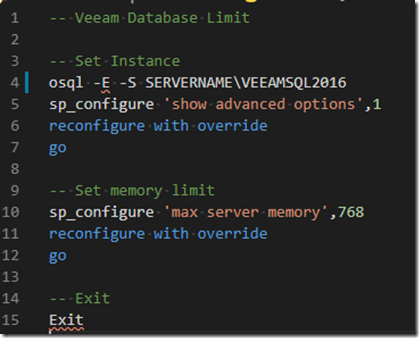 Going forward we will be running this step on all Veeam Backup & Replication servers we deploy with the memory setting tuned to the specific instance needs over time. 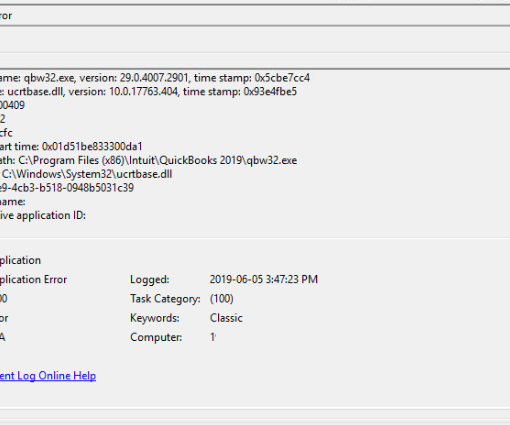 So, we went through the gamut of troubleshooting in our previous post: Intuit QuickBooks: Freeze/Crash or Error 6123 When Opening a QB […]

We have a pair of Cisco SG500x switches that we are setting up in a redundant configuration, so not stacked, that require […]

The HILTI Adaptive torque module has a software component that needs to be downloaded for programing, management, and reporting. HILTI Adaptive Torque […]

We set up some resources initially for a client setup. But, in the end we need to have several small Web Apps […]

One thought on “Veeam: Manage the SQL Instance Memory Limit”